This post follows directly (but will be much less mathematical) from the previous post, where I derived the Maxwell Relations.

As a quick recap; the Maxwell Relations are a set of relationships between the partial derivatives of the intensive and extensive properties of a thermodynamic system which are quite useful because they allow us to change certain quantities, that are often difficult to measure, to others which are more readily measured.

The Maxwell Relations we derived are:

where $T$ is temperature, $V$ is volume, $S$ is entropy and $P$ is pressure. Also the notation $(\frac{\partial T}{\partial V})_S$ means the partial derivative of $T$ with respect to $V$ while keeping $S$ explicitly constant. This is known as constrained variable notation.

It might also be useful to recall the four thermodynamic potentials we discussed last time and their natural variables:

The key to this mnemonic is the phrase Good Physicists Have Studied Under Very Fine Teachers. Notice how the first letter of every word can represent a thermodynamic potential or variable: 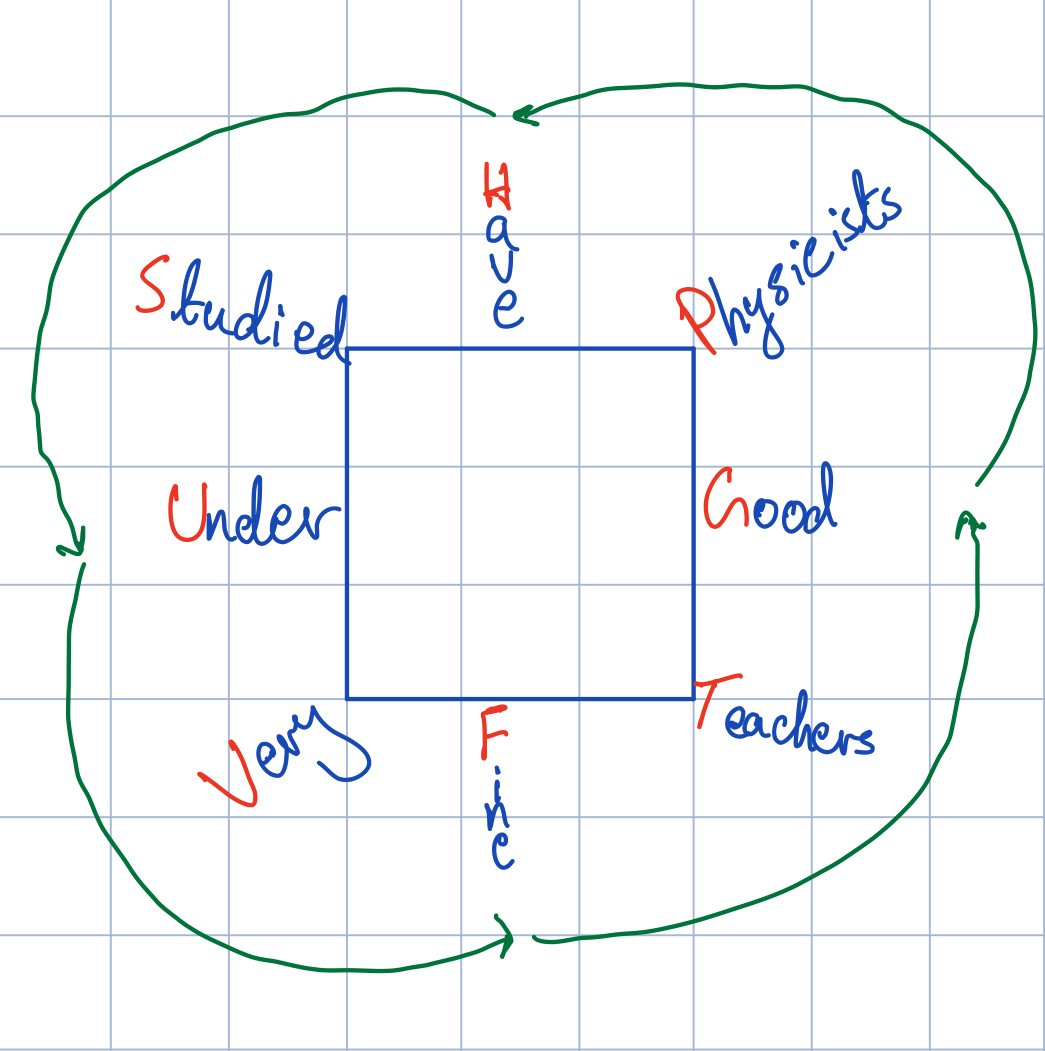 Thermodynamic square formed by adding the letters from the mnemonic on the sides and corners of the square starting at the right hand side and moving counter-clockwise.

Cleaning this up by removing the words and the green arrows along with the square: 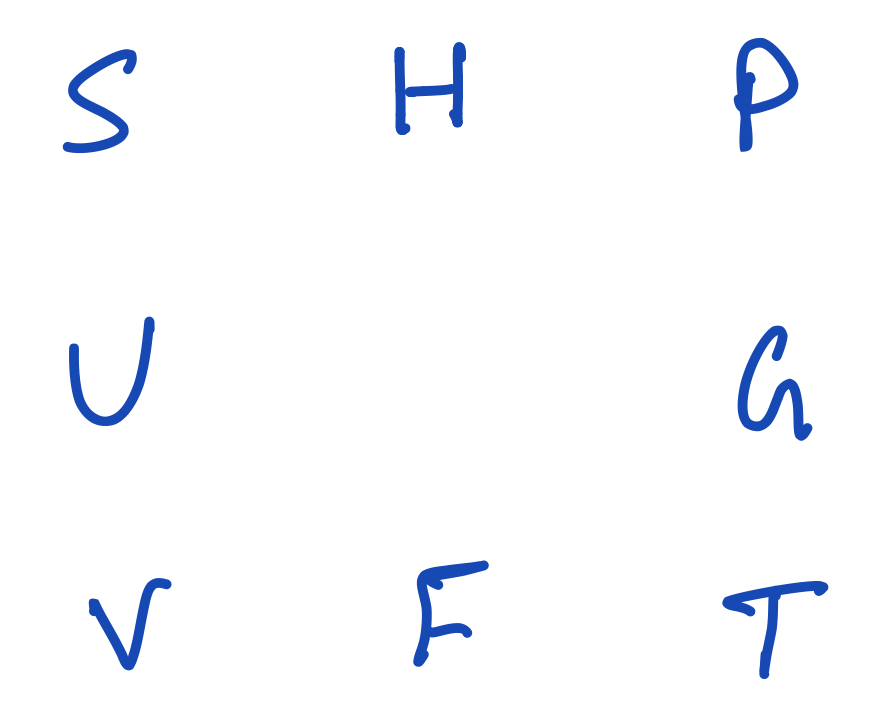 Notice how in the above square each thermodynamic potential has its natural variables around it. For instance, the Gibbs Free Energy, $G$, has pressure, $P$, above it and temperature, $T$, underneath it. We can also extend this to the rest of the potentials: 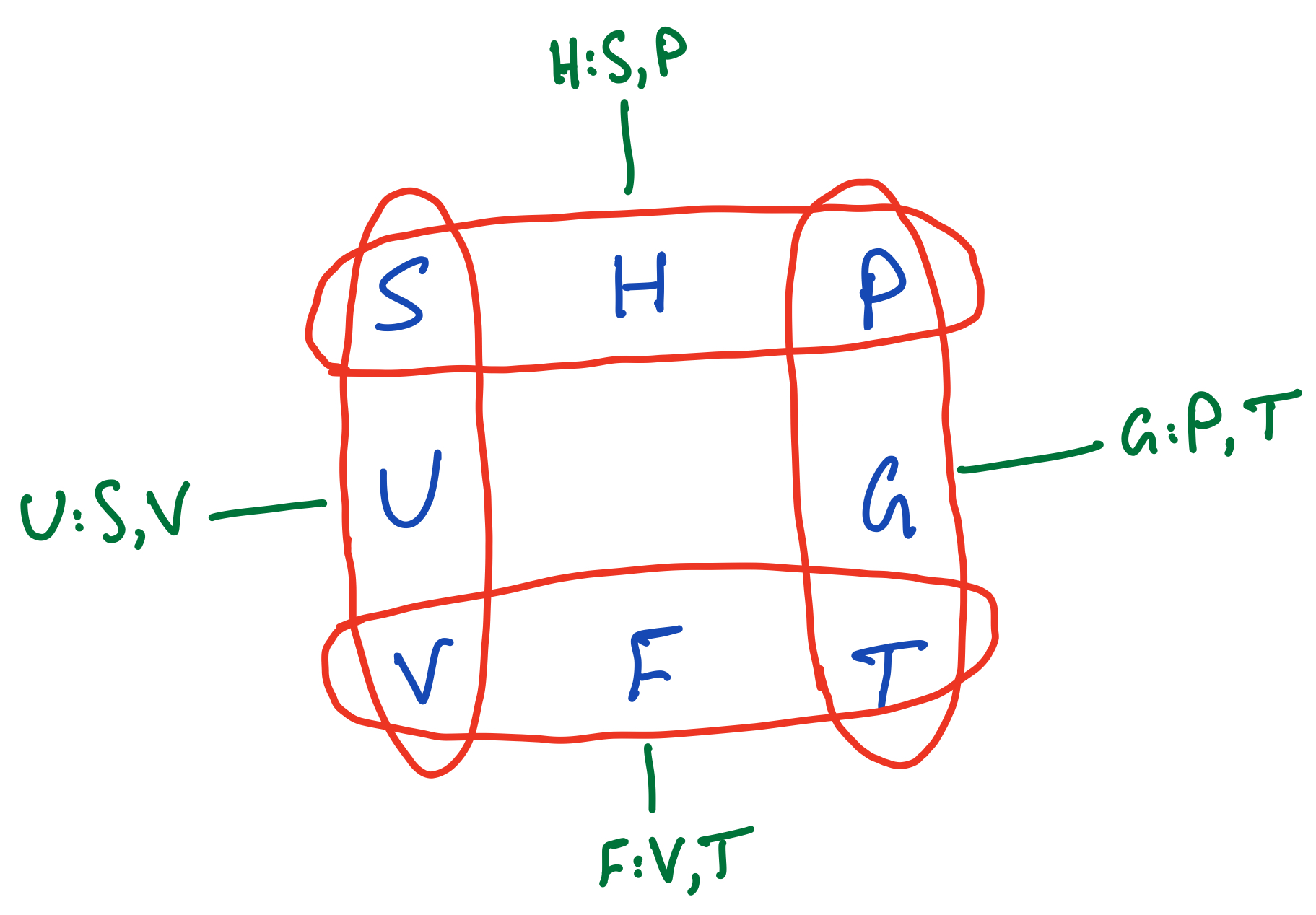 Let us now simplify the square further by removing the thermodynamic potentials and having only the variables $P$, $S$, $V$ and $T$ on the square, still in the same locations:

Thermodynamic square leaving out the potentials. 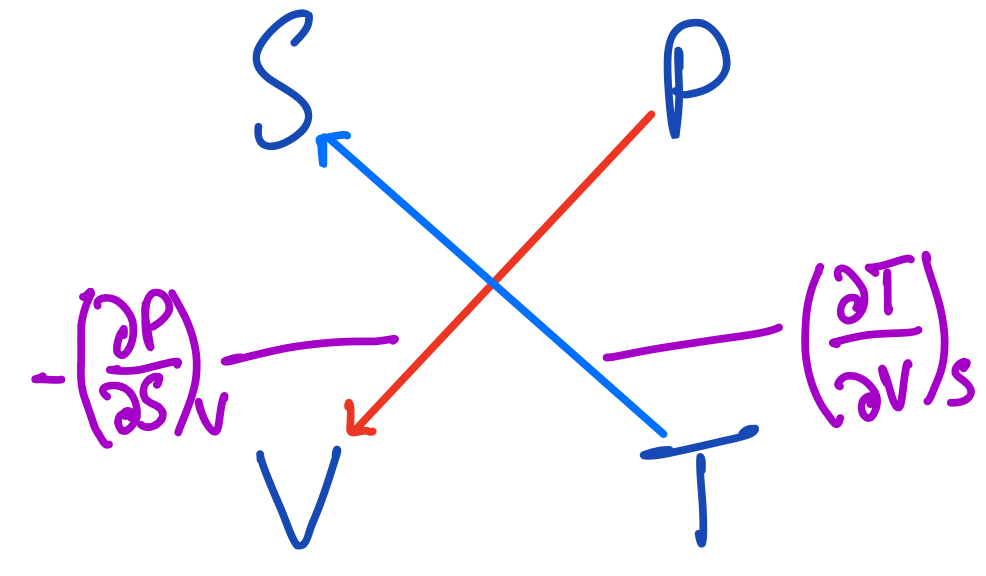 Equating the expressions these arrows represent, we get the first Maxwell Relation:

We can now apply the same strategy while drawing other arrows. Before we go on to do this, I encourage the reader to try this out themselves and see if they can deduce the other Maxwell Relations from this square, without reading ahead. 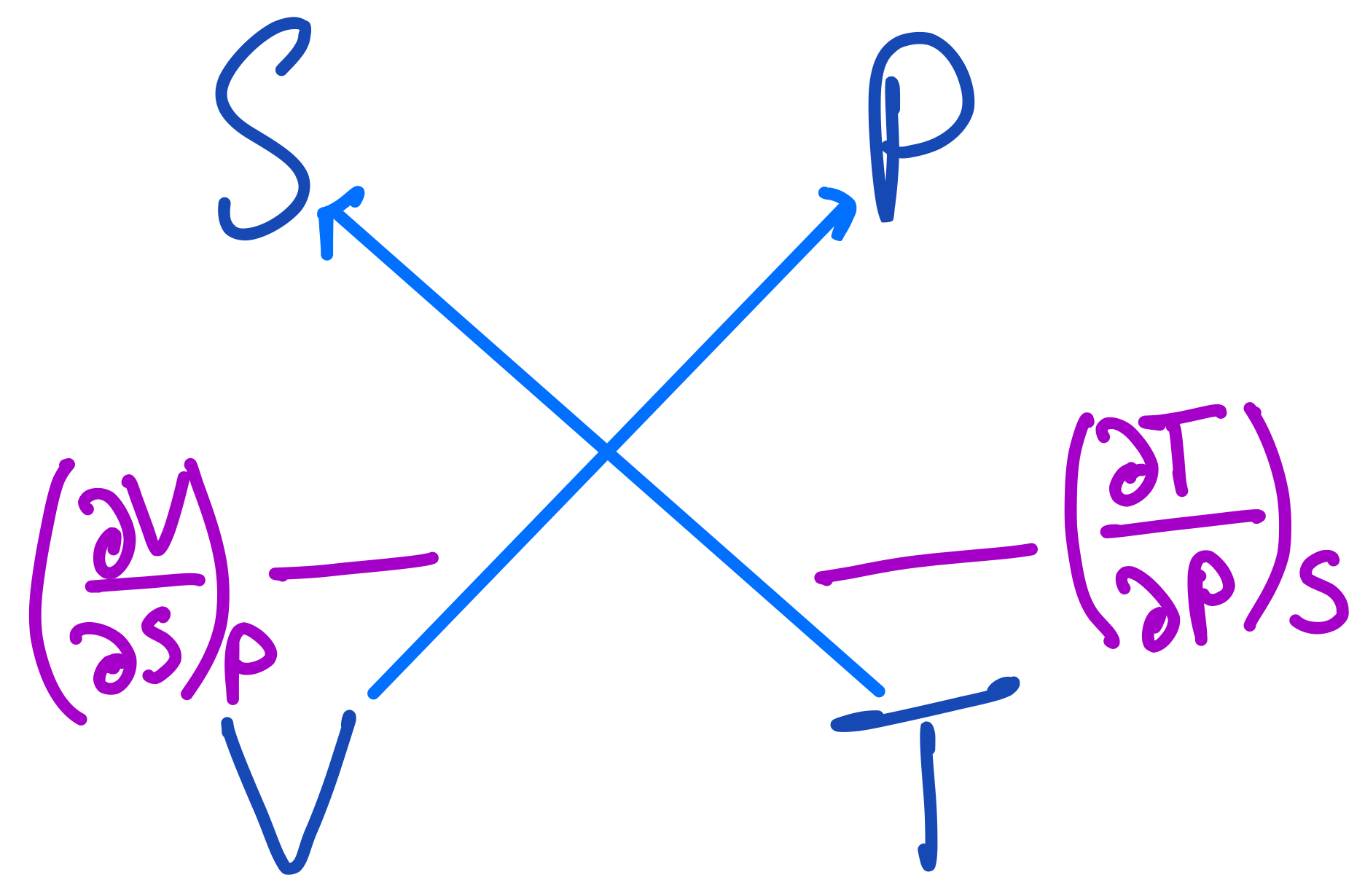 The second Maxwell Relation from the thermodynamic square.

From this we get the second relation: 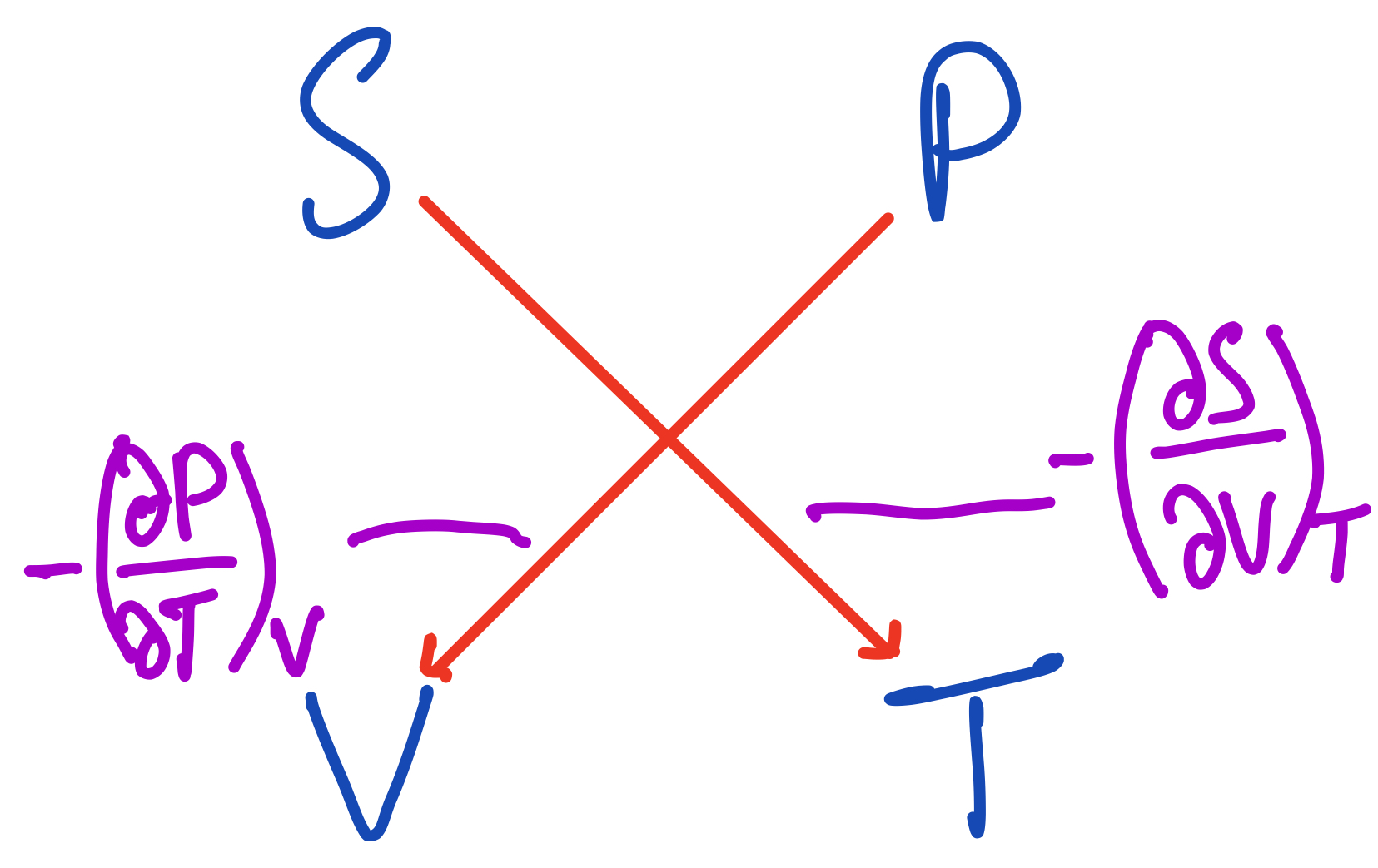 The third Maxwell Relation from the thermodynamic square.

From these arrows, we get this relation:

Since there's a minus sign on both sides, we can cancel them out and get the relation we're more familiar with: 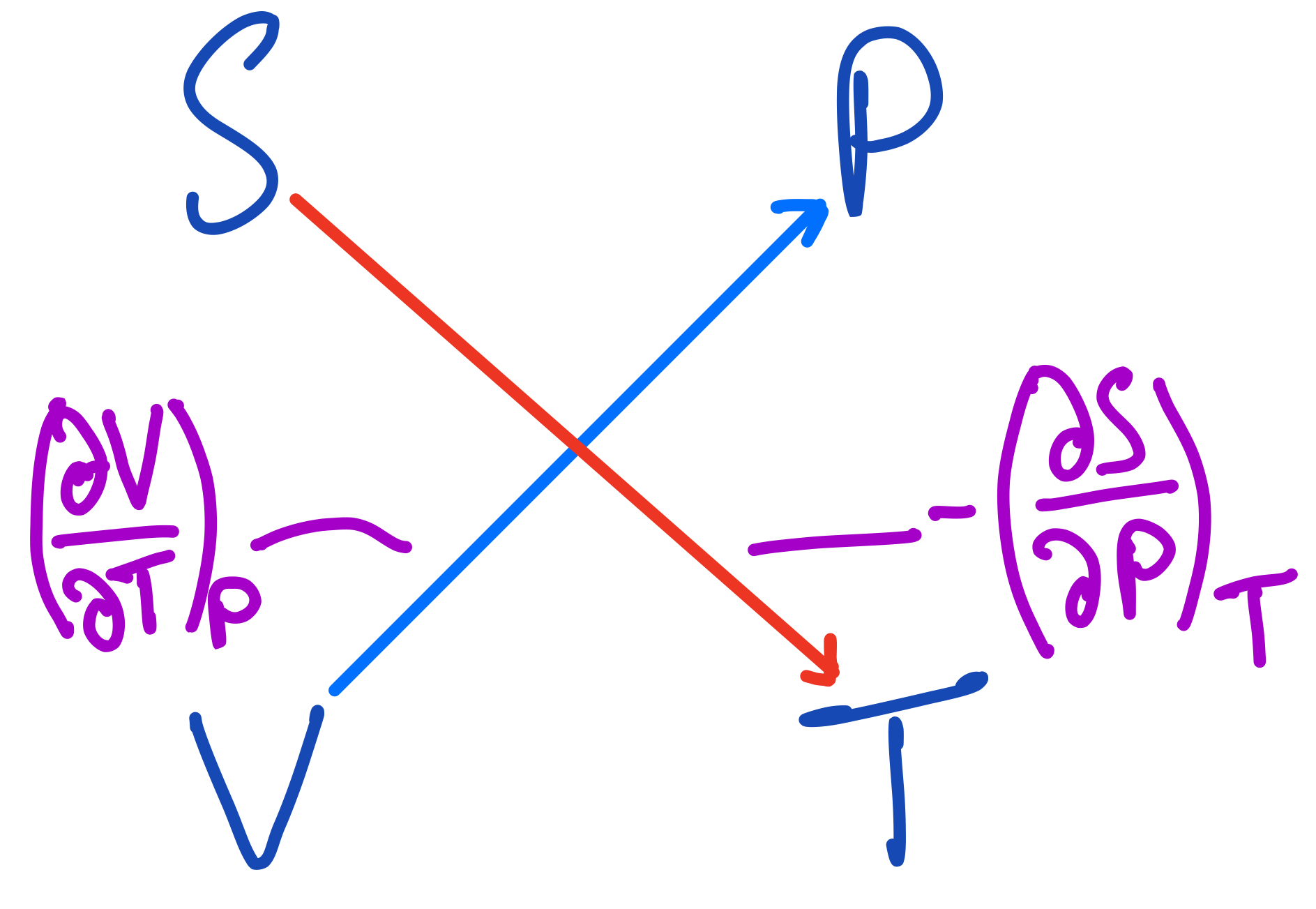 The fourth Maxwell Relation from the thermodynamic square.

And finally, the last relation is:

In this post, we managed to deduce the four Maxwell Relations we derived in the previous post using the mnemonic we introduced. Remember, the key is the phrase Good Physicists Have Studied Under Very Fine Teachers.

We also saw how we can find the natural variables of each of the four thermodynamic potentials we discussed previously using this mnemonic, which can be fairly handy sometimes.

I recently started a new series on the blog about digital circuits, which I've been learning about in my free time the past while. Feel free to check that out, if you're interested. I've only written the first part at this point and there's more planned. Find the first part here.

There's also more thermodynamics blogs coming though! Currently planned are ones about using the Maxwell Relations to derive relationships between the heat capacities as well as an introduction to statistical mechanics and the partition function.

Thanks for reading! I hope you've found the article helpful. As usual, feedback is very much appreciated and will go towards improving the blog. So feel free to leave a comment below, contact me through the website, or tweet me @_devdude.